This is part one of a four part series.  Part 2 is here.  Parts three and four will follow in the coming months. 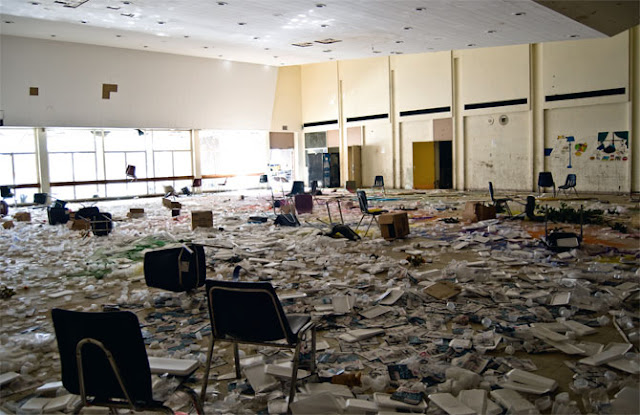 There are many of issues with Catholic seminaries in the USA post Vatican-II.  They've gotten better of late, but there is still a long way to go.  Americans sometimes think they can avoid these issues by joining the IVE.  Unfortunately, formation at the Institute has its own set of problems.

In this series of posts we'll highlight issues you'll encounter during formation with the IVE.  It is necessary to publish them here because the IVE won't tell you about them beforehand and you wouldn't otherwise know about them until after you've already joined.

Because the IVE like to think of and advertise themselves as an intellectual - even academic - congregation, we thought we'd address that pillar first.

We are a bit flummoxed that this is actually part of their FAQ because this in no way describes the Institute.  Despite trumpeting their size and growth, only one or two of their priests have ever published anything at all and only with their own IVE Press.  Some priests get 2 year licentiates in philosophy or theology (the bare minimum required to teach at a normal seminary) but we aren't aware of any IVE priest that has a doctorate.  We aren't even sure that half of the US seminarians enter with high-school diplomas.  This doesn't make them bad priests or bad people, but it does make this FAQ a bit haughty and disingenuous... though that is certainly not out of character for the IVE.

We can see from Jack Toller's account of the IVE in Argentina that there has never been a strong academic foundation or intellectual bent - and that this characteristic goes back to the founder, Fr. Carlos Buela:

He did not, however, put much emphasis on the quality of his professors, and most of the better endowed ones soon left the Institute for one reason or another (I’m thinking here of Fathers Carlos Biestro and Ramiro Sáenz, but there were many more that left as well.).  I had visited their premises in 1992 and had seen things for myself.  To begin with, there was no proper library, no proper classrooms, no proper teachers - the whole system of studies amounted to not much more than a hodge-podge of a bit of philosophy here, and a bit of theology there.  This was explained away, of course, with reference to the difficulties that go with all new institutions when at the early stage of their foundation, etc.  Anyway, this never changed much, for Father Buela never had a high regard for scholarly studies - that is, an appetite and quest for truth. Quite different was his approach - as with everything else - if high grades and scholarly distinctions were considered only as a means to other ends

As you will see below, this account is consistent with the current state of IVE academic formation in both the USA and Europe (we can't speak to the current state in Argentina.)  The very idea that you will be in an academic program that is in any way rigorous or an environment that could be described as studious is just bizarre.


The Thomism is really just Advertising

Thomism is another aspect of their formation that the IVE have become very vocal about  and it attracts more than a few Americans seeking to avoid strains of modernism.  Unfortunately, like so many aspects of their congregation, this is more an instrument for self-promotion than an actual guiding principle.  Their claim to be faithful to St Thomas  lacks any academic foundation.

A Lord of the Flies Approach to Teaching

While some philosophy classes are taught by the local IVE parish priests who will at best have the equivalent of a Master's degree in philosophy or theology, the majority of non-theology classes are taught by fellow seminarians.  These seminarians are obviously not credentialed.  Most have no degrees in the subjects they are teaching nor any real degree at all.  They are just favored seminarians who took the class a year or two earlier, then with no teaching experience, turn around and conduct class from pre-assembled hand-me-down class notes.

Classes are short and, given the IVE's chaotic schedule-keeping, frequently cancelled.  There are no papers assigned.  Your "study time" outside of class is generally silent so you are not able to discuss or ask questions from fellow classmates as you would at a normal institution.  When you do ask questions from your "professor" you aren't likely to get any depth past what's on the notes he was given.

So their much-trumpeted intellectual foundation in Thomist philosophy will have faux-professors, rushed classes, limited discussion, no papers...  It's all rote memorization and regurgitation - a surface level understanding of philosophical terms from a perspective that the Institute controls.

That's why, as much as they belittle other seminaries, when they get a seminarian who has actually studied at a diocesan seminary or with a different order he is immediately given teaching responsibilities - because his academic background and rigor will be so much deeper than those that have only studied with the IVE.  If you enter with even a secular undergrad degree you'll probably end up teaching something very early on, simply because you'll be that much further ahead than your classmates.

No Foundation in Theology Either

Dogmatic theology courses at any other seminary would be taught over the course of a semester by a real professor, with time for reading, discussing, and digesting these important concepts.  Yet at the IVE the majority of these courses are taught over the course of only 1 or 2 weeks.  Why?  Because they don't have real professors.  They have a few priests at the seminary, but they don't have the background or the time to teach all the classes - especially since they are given many other responsibilities (eg. their seminary rector was also the pastor at the seminary's parish.)  So their solution is to fly in IVE priests from US parishes who are able to travel in for only a week or two at a time.

Usually these are IVE priests who have spent their whole adult life with the IVE, going to the IVE minor-seminary for high-school, then the IVE seminary in Argentina for their philosophy and theology.  At best they will have 2 years at real academic institutions getting licentiates in theology or philosophy.  None of them have published.  None of them have real experience teaching.  None of them will teach full semester classes.

And when you think it couldn't get worse they will even have some of the more senior, educated seminarians (who fit that description because they had time at non-IVE seminaries) teaching theology classes.

Their Italian seminary in Montefiascone is apparently even worse.  Many seminarians don't even have teachers, but study modules on their own.  English speakers have self-study classes using class notes from the U.S. seminary and non-English, non-Italian speakers spend all their study time translating Italian notes into their own native language.

None of it is Accredited

Not only are the teachers not actual professors, but neither are any of the IVE courses accredited.  What's that mean?  It means if you study with the IVE and then (like most) decide to leave, none of the classes you have taken with the IVE will count for anything.  You'll have to take all the courses over.  There's no real college credit and no real degree.  Nobody else inside or outside of the Church recognizes their coursework.  It also means that if you discern that you don't have a vocation, you leave the IVE with nothing, regardless of how long you studied with them.  They are only able to ordain priests because of their relationships with Cardinals McCarrick and Sodano.

A few seminarians in the US that qualify (ie. are here legally & have  legitimate undergrad degree prior to joining the IVE) will have the opportunity to attend philosophy courses at a real academic institution.  They will study in the 2-year Licentiate in Philosophy Program at the Catholic University of America (CUA.)  The irony is that other orders with local seminarians shy away from CUA (which has some heterodox professors), instead encouraging their seminarians to take as many classes as possible at the more rigorous and more orthodox Dominican House of Studies (DHS) right across the street.  (The likely reason the IVE don't do this is that DHS requirements are too stringent for any IVE candidates to be admitted and, without Cardinal McCarrick to pull strings like he does at CUA, they can't get in.)

The IVE has Trouble Telling the Truth (Again) about This Too

If you look at the DHS requirements, they include Latin and Greek, which brings us to this:

Notice that they claim three years of both Greek and Latin.  We honestly can't fathom how they put this on their site. While you will get at least some Latin "classes" (often taught by other seminarians) there is not even the pretense of studying that much Greek.  Maybe you'll get a semester of Greek at best in the US and maybe a few candidates in Rome will get it in individual study, but this just isn't true.  Unfortunately, this doesn't surprise us.  As we've mentioned before the IVE doesn't let the truth interfere with their marketing.

What about time to study?

Bright candidates might overlook the lack of structured classes and qualified teachers with the hope of being able to study on their own.  Unfortunately, the schedule is filled with so many mandatory activities that this isn't realistic.

Even during finals week, instead of having more time to study, more unrelated activities are just added to the schedule.  "Sports" will be scheduled every day during exam week and, as you'll learn when you join, this isn't optional.  Work also continues as normal during the exam period and is, in fact, often increased to fill in the schedule since there are only exams and no regular classes.  Eutrapaelia will also be added to the schedule every single night during the exam week - keeping you up even later than usual.  So even though you'll be mentally exhausted from studying and be physically exhausted from having sports every day, you'll have to attend Eutrapaelia and play games late into the night.  This is very unlike any other seminary - or any normal academic institute for that matter - where students are given additional time pior to and during exams to study and adequately prepare.

This is the truth

Our purpose here isn't to pick on the IVE, their priests, or their seminarians.  Our purpose is to give prospective seminarians access to the truth.  If the IVE were more humble and more honest in how they portray their formation, this wouldn't be necessary.
at 7:28 PM