Clericalism and the Constitution... (Again.) 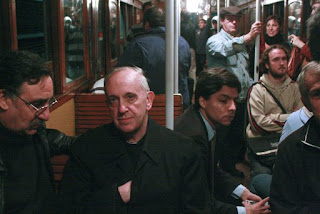 These reports on Pope Francis were a good excuse to write about a problem that has been on our mind for some time: Clericalism at the Institute and it's seminary.


Clericalism and the Constitution

By now many of you have heard how Pope Francis - way back when he was only an Archbishop - used to ride the subway, take the bus, cook his own meals, and even help clean up when his fellow Jesuits met.  It must surprise IVE seminarians and nuns that an Archbishop from Argentina would do these things, because that's certainly not how their Argentine IVE superiors behave.

Instead, within the Institute there is an aura of elitism, chauvinism, and - most troubling - the regular practice of clericalism.   Most write it off as cultural, but it is not.  Neither is it normal among religious communities.  As we have mentioned before and as we will explain below, this is another example of how the Institute's constitution is not something they follow - rather, it is simply for show.

Clericalism at the Institute includes, but is not limited to, the two most obvious and easily verifiable examples we cover below.

The simplest and most easily verifiable instance of this clericalism is their mealtime practices - it's also a nice contrast with stories of Pope Francis, as Archbishop, cooking his own meals and cleaning up at his order's events.

At the seminary, the seminarians eat poor tasting, expired, and often rotting food, frequently eating the same meal over and over for days at a time.  Meanwhile, the priests - though eating in the same area, although at separate tables - have a different meal of better quality, fresh food, complete with wine and dessert.  The priests don't ever take any part in serving or cleanup either - that's all for seminarians or sisters to do.

This is easy to verify.  Simply attend one of the Friday "Eutrapalia" pizza nights at the seminary and you'll be observe these points: there are "special" pizza's reserved for priests only, priests are served by seminarians, priests get the option of wine and dessert, and when it is done only seminarians clean up.

Wanting to set up a hierarchy of food is debatable, but claiming that you always choose the worst (see their constitution below) when you actually demand the best available and leave the worst for others is simply dishonest.  They force their seminarians to live out the vow of poverty according to their constitutions, but the priests themselves actively flaunt this vow in front of all the seminarians who are under their authority for formation.

Another instance of this clericalism is a strong contrast to images of Pope Francis on the subway: the IVE priests don't exactly use public transportation.  The Sisters at the novitiate are at least a 40 minute drive from the seminary (with no traffic) and the priests from the seminary give spiritual direction to these sisters.  However, instead of getting in one of the many cars at the seminary and driving to the sisters and back, the IVE priest makes a sister drive to pick him up, drive him back to the sisters house, then back to the seminary, and then drive herself back to the novitiate.  So a sister spends three hours in the car, so that the IVE priest won't have to drive himself for 1 ½ hours. He makes the sisters spend twice the money on gas, so that he will not have to spend half of it.


This is not only clericalism, but it's also a very poor stewardship of resources.  Three hours of the sisters time is wasted driving unnecessarily and the cost of gasoline for the trip is doubled (remember the big vans they drive are not very fuel efficient and gas is not cheap!)

What makes this all even stranger is that common IVE practices like these (and many others) are in stark contrast with the Institute's own constitutions which says in paragraph 67 that a member should "prefer for his own use and to choose, whenever possible, that of least value, the least pleasant and the most uncomfortable" and "accept with joy, for the love of God, privations even in necessary things for the sake of holy poverty."

This may indeed surprise the seminarians, but it does not surprise us, because as we have pointed out before and will elaborate further in the future, the IVE superiors don't really follow their own constitution.  They just use the document to manipulate those in their care - especially seminarians and sisters.

They demand what is for all purposes blind obedience from those in formation, while they wouldn't obey Pope Francis when he was their Archbishop in Argentina.  They force poverty on seminarians (who are mostly undocumented immigrants, essentially trapped at the seminary) while the same seminarians pour them wine and serve them dessert on a nightly basis.

Many of the seminarians and sisters probably think it's just a "cultural thing", "Argentinians are just funny that way", which is why the humility and simplicity of Pope Francis - now the most famous Argentine of them all - must come as quite a shock.


Now a priestly office certainly deserves deference and respect from others.  Often people will want to honor Christ by being kind to a priest and there is nothing wrong with that either.  The problems start when people begin to feel entitled to or demand special treatment.  This is the path to priestly narcissism.

A sense of "being special" fostered by the IVE prior to and during formation, turns into a sense of entitlement as a priest.  This entitlement leads them to justify all sorts of behavior, even openly flaunting their vow of poverty in front of their seminarians on a daily basis and demanding service from them like waiters at a restaurant.  In their eyes, receiving the priestly character at ordination isn't seen as an added responsibility, instead it is treated a license to flaunt the rules.

Ultimately, like Christ, a priest is called to serve, not to be served.   Unfortunately, rather than provide an example to those in their care, the IVE priests lord it over them.  They set a bad example for seminarians and damage their formation in the process.  This is doubly unfortunate considering that we are currently so in need of properly formed priests.
at 4:49 PM

Email ThisBlogThis!Share to TwitterShare to FacebookShare to Pinterest
Labels: Formation

How Many Leave the Institute?

Update: On the Spanish web, the high attrition among IVE priests is a recurring theme and rightly so.  Such a high number of people leaving after ordination indicates a real problem within the order.  Not a minor problem, but a fundamental one - especially considering how new the congregation is.

What we wrote below we wrote very early on in our investigation.  Since that time we have seen more documentation and data.  All of it supports the 40-50% attrition number we arrive at below, though it suggests that the total number of both current priests and those that have left is higher than our original estimates below.

There are only two groups that likely have access to the exact numbers: the IVE leadership and the Diocese of Segni-Vetrelli in Italy where they are headquartered.  Given the IVE leadership's issues with the truth we'd be reluctant to take anything they say at face value, but if you speak Italian it wouldn't hurt to contact the diocese of Velletri-Segni in Italy.  The Vicar of Clergy there may be able to help.

One question readers ask is "If it's so bad, why don't more people leave?"  The answer is that many, many do.

Priests are leaving the Institute of the Incarnate Word early and often because of the same problems we highlight on this blog.

A tremendous number leave during formation, though - we would argue - not through the usual process of discernment.  A large number of IVE priests leave as well (even former Superior Generals).  We calculate this number to be greater than 40% and potentially over 50% (see below for more info.)

This isn't simply a case of "living in a fallen world".   This is a spectacularly high rate of a attrition for a religious order.  It's especially striking because it's such a young order.  They've barely been ordaining priests for 20 years and already such a high number are leaving.  It's not just an example of people breaking vows either:  many still feel called to the priesthood - just not with the IVE.  In fact, there are single dioceses in the US with as many as 6 ex-IVE priests.

At least 40%, but potentially greater than 50% of all ordained IVE priests have left

Let us explain how we arrive at the attrition number above (also covered in our "Irregularities" page.)  The IVE for the past several years has claimed a number of around 350 priests.  We believe this refers to the number ordained, not the number that are still in the order.   If you look at their number of parishes (96), multiply that by 2, and add in a few for the seminaries and "monasteries" and you arrive at around 200 active priests.  200 out of 350 means 57% stay, 43% leave.

Since the "350" figure has been used for a while and since they are ordaining new priests every year, the actual number of priests ordained should have grown.  This means the real attrition rate should be even higher then the 43% we estimated above.   We do know that the early class of 1996 saw 9 out of 17 leave the IVE, giving a 53% attrition rate (<-- Use Google Chrome to translate this link), which is probably what the long-run rate will look like.

The Institute covers this up, because admitting this drop-out rate would undermine their carefully crafted image of a "young, joyful, growing order."

Given these readily available facts it is strange the IVE remains adamant about the "350" number.  Of course, admitting to the problem would potentially do a lot of damage to their image and their recruiting, but it seems a serious enough issue that it should at least be disclosed to those "discerning" with the order.  That does seem the ethical thing to do, doesn't it?

Unfortunately, that's not how the Institute of the Incarnate Word operates.  In the end they only do what is good for the Institute:  they deny and hide the truth and attack anyone who tries to expose the problems or help those hurt by them.  The IVE does everything it can to maintain the image of a healthy, happy, growing religious society when the reality is quite the opposite.
at 5:00 PM No comments: