UPDATE:  There has been some confusion as to the point of this post so let us attempt to clarify it's purpose: we are not debating when someone should or should not where a cassock, nor how often it should be worn.  Instead, we are highlighting how the institute fails to follow it's own constitution and often uses symbols of orthodoxy only for show.  We've given additional examples in this post how the Institute's superiors use the constitution for show and to control those in their care, but don't really follow it themselves.

One of the largest problems with the IVE is the fact that they fail to follow their own constitution.  One of the most visible examples of this when you are inside is the fact that many of the priests, especially the Provincial, Rector, and Founder, almost never wear their habit.

They have chosen the cassock as their habit because it is such a powerful sign of the Catholic Church, the Priesthood, and orthodoxy. One of the things many lament in the post-VII Church is that Cassocks, along with other Religious habits, were mostly abandoned. The Institute claims they are different, see the following from the Institute's constitution:

154 The religious of our Institute must wear the Holy Habit, which is a sign of their consecration and witness of their poverty. The value of the habit is given “not only because it contributes to the propriety of the priest in his external behavior or in the exercise of his ministry, but above all because it gives evidence within the ecclesiastical community of the public witness that each priest is held to give of his own identity and special belonging to God.” Now more than ever, signs must be utilized, “especially in today’s world, so sensitive to the language of images… where the sense of the sacred has been so terribly weakened, people also need these elements that claim to God, that cannot be disregarded without an impoverishment of our priestly service.” This sign “expresses for the religious his consecration and makes evident the eschatological end of religious life.” Let us then love the habit, which should be as our very own skin. Saint Francis of Assisi said that the simple presence of a religious dressed in the holy habit was a way of preaching.

The Cassock, as their constitutions say, is a very powerful sign not only to the world but to the religious themselves. Many are attracted to the Institute because of what this very powerful sign represents. To many it represents Orthodoxy and a different direction or commitment to a way of life that, those not wearing habits do not have.

Unfortunately priests in the IVE do not wear their cassocks except as promotional items at public events. This is not only isolated instances with those at lower levels, but goes all the way up to those in charge of formation, the seminary rector, the provincial, and the founder himself.  An IVE-only event is the last place you will see a priest in a cassock.

There are certainly reasons not to wear a habit, but there are many reasons for a habit to be worn often - and many are listed in their own constitutions. They not only fail to wear the habit, but more importantly fail to fulfill their own constitutions. Some may say these are only isolated instances or individuals, but remember that the pictures their founder himself chose to use on his book cover has him without a cassock—his “second skin”.

Only those in formation where their cassocks the majority of the time - and they would be corrected by superiors if they did not.  It is sad that they have chosen to use this “habit” more as a public advertising piece, to try and recruit vocations, than for the theological and spiritual reasons it should be worn.

This is only one of many ways they violate their own founding documents out of convenience.  We also feel they have similar disdain for Church authority and federal law.  We will go into more later. Like the others, it goes all they way to the founder, who doesn't even wear his cassock when getting his picture taken with the pope or posing for his own book cover (For those of you who don't know, the priest in the pictures is Fr. Buela, the IVE founder, who refers to the cassock as a "second skin".  The first is the photo from his own book cover.): 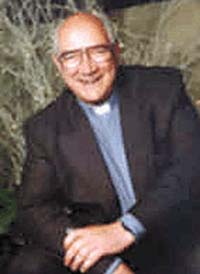 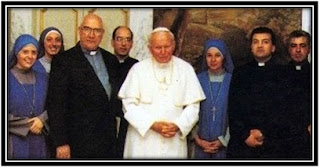 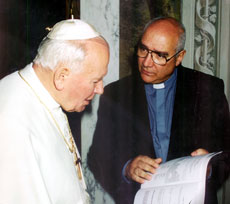 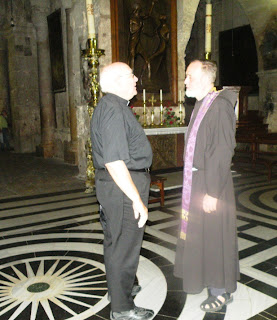 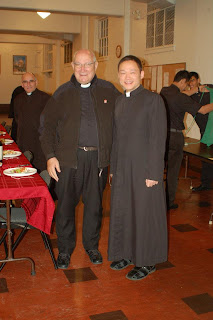 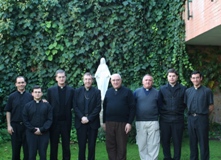 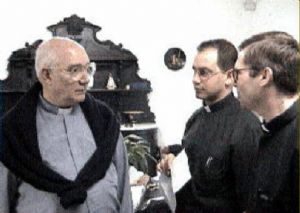