Why People Enter the IVE - Part I


This is the first part of a two post series.  For part two go here. 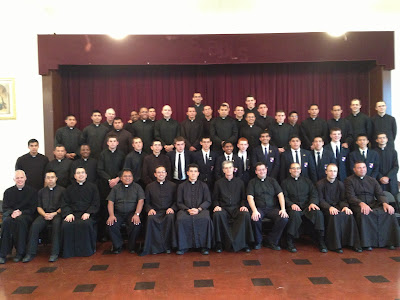 Although strangely reticent about the many who leave during formation and after ordination, the IVE still love to talk about numbers.  When you hear someone from the IVE talk about "bearing fruits", the fruits are invariably measured quantitatively by headcount: "This number of priests.  That number of people in formation.  This many novices."  Ask a priest how his parish is doing he'll tell you how many kids are in catechism and how many attended such and such retreat.

These numbers not only matter to the IVE, but to prospective members as well.  After all, there is often "safety in numbers."  Numbers provide reassurance:  "Hey… They all joined... so it can't be that bad."

People are thus reassured by the many pictures of large groups on IVE websites, their Facebook page, their Twitter, Google+, Flickr, Tumblr, etc.  The IVE know image matters. The constant presence of a photographer at IVE events is not an accident.

Yet there is more than meets the eye

As we've mentioned before, once you scratch the surface and get beyond first impressions, the IVE are not all they seem to be.  Be it their history, formation, or poverty, there is always more to the story than what their leadership presents to the public.  That holds true in this case as well.  Once you lift the veil and understand what's behind these numbers, who has joined and why, the truth is much less reassuring.

Five types enter because they have no place else to go

The first red flag is that most men are entering the IVE because they can't (or think they can't) get in anywhere else.  This group can be broken down into 5 categories:


Let's take a look at each of these groups.

Illegal Aliens - The American Church does not accept illegal aliens into its seminaries and neither do any orders who form candidates in America.  They all ask that men return to their country of legal residence to pursue a vocation, whether that means studying there or returning to the US to study with the proper visa.  There are some obvious reasons for this.  The first is that it's a violation of federal law to knowingly harbor individuals who are in violation of immigration law.  The second is that individuals who are entirely dependent on an order/diocese with no legal status are not entirely free to choose their vocation.

Yet this is exactly what the IVE does.  They regularly recruit young spanish-speaking illegal immigrants from their parishes.  Few have immediate family in the country.  These young men often have to rely on donations to even reach the seminary.  If they have any money left upon entering the novitiate, they are encouraged to give that money to the IVE.  There is no freedom of conscience or discernment for these men.  Their choice is to stay or to leave, destitute.  The only reason they can be ordained is because Cardinal McCarrick is complicit in the ordinations (note that they usually travel outside of Cardinal Wuerl's authority to perform these ordinations.)

Too old for religious orders - There are some men who choose the IVE because they feel called to be part of a order religious order as opposed to the diocesan priesthood, but are in their late 30's or 40's, which is usually over the age cut-off for these types of groups.  If this describes you, we'd really encourage you to cast a wide-net and reach out to as many orders as you can.  See here.  You have many more options than you think you do.  Even orders with stated age-limits make exceptions.  If age is really the limiting issue with orders, then consider reaching out to some conservative bishops.  If, after all this, the IVE is still the only group that will take you, it's probably not a good sign.

Too old even for dioceses - This group is primarily comprised of widowers, however there are some with annulled marriages as well.  These are men in their 50's and 60's who are over the age cutoff even for dioceses.  Most of the men in this group leave very quickly and very disappointed as they learn first hand the issues we outline on this blog.  There are a few that stay, however - men who generally have had very 'interesting' pasts and would likely not have been accepted into any diocese or order regardless of their age.  For all the IVE's talk about the need for "well-formed priests", they have taken great liberties with these men, pushing them through to ordination very quickly and with very little actual formation.

Men with extenuating circumstances - Every year men enter the IVE with issues and circumstances that would normally prevent them from entering any other seminary.  Some enter with poorly addressed mental illnesses or histories of abuse.  Others even enter without all the sacraments of initiation, receiving baptisms or confirmations during the novitiate.  If you have to baptize someone, conditionally or otherwise, during the novitiate it's a pretty big sign that they shouldn't be there.  It's also against Canon Law (see Canon 645.)

What these practices reveal about the IVE

At this point there are four patterns our readers should be picking up on:

No positive qualities: Most men aren't going to the IVE because of any unique charisms or qualities the IVE possesses.  They are going there because it is the only place that will take them.  To put it another way, the IVE grows only because it has lower standards than anyone else.

Pride, hubris, and arrogance:  It is through arrogance and hubris that the IVE ignore the Church, Canon Law, Immigration law and the opinion of every other Catholic seminary in the United States by accepting candidates no one else will take. It is pride and overconfidence which makes them think they are better judges of prudence and character and can properly form these men where other seminaries can't.

The IVE are not concerned about their parishioners:  There is a reason that these men can't get into any other seminary.  Many have mental illnesses, major personality disorders, histories of strange and imprudent actions, immaturity issues, etc.  Ordaining them and sending them to a Catholic parish could endanger good parishioners that are under their spiritual care.  Priests are viewed as authority figures, especially in the moral and spiritual realm.  Nothing has done more damage to the Church and the faithful in recent years than poorly screened priests.  Yet poorly screening priests is exactly what the IVE does.

The IVE are not concerned about their candidates:  If someone needs to be baptized or confirmed during the novitiate, they likely have not properly discerned their vocation to religious life and are not in any way spiritually ready for religious life.  It's even against canon law (see C. 645) to accept them into a novitiate; Letting the spiritually immature enter into a very extreme environment will not be healthy for them either.  Many if not all who enter prematurely like this leave wounded.  Neither is encouraging illegal aliens to remain here illegally is not in their best interest.

None of these "exceptions" show compassion or charity toward the candidates.  If someone does not have all their sacraments of initiation, the right thing to do is to give them the sacraments at their parish and then give them time and help to develop a mature spiritual life so they can discern their vocation properly.

If someone is here illegally, neither is it charitable to violate Church practice and Federal law by accepting them to the novitiate.  It places these men in a very vulnerable and difficult position.  If they genuinely feel they have a vocation, they should go to their home country and the Institute should help them get the appropriate visa.  It's not that difficult and they've done it for other candidates in the past.

If someone has mental, emotional, or personality issues that would preclude them from entering a seminary or lead to their expulsion from one, the right thing to do is to help them address these issues before they even tackle the question of a vocation.

The truth behind the IVE numbers

The Church has reasons that men like this cannot be accepted into US seminaries, yet the IVE does so anyway and (thanks to Cardinal McCarrick's complicity) ordains men from all of the above categories.  So the next time you are encouraged by a large group photo of the IVE, keep in mind why many are there: manipulative recruiting methods and dangerously low standards.  Once you pull back the curtains a bit, these photos - like so many other aspects of the IVE - are much less encouraging.
at 3:27 PM No comments: