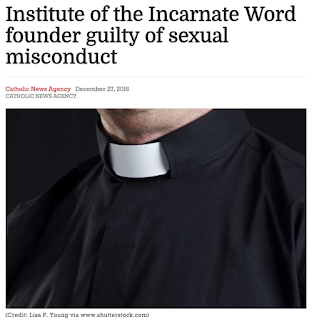 The title says it all.  To make it worse, the most recent spate of public activity was sparked by accusations of sexual abuse at the IVE’s minor seminary in Argentina.  This led to public statements by many of the actors involved, including the Bishop of San Rafael where the IVE were founded.  These have been picked up and broadcast in multiple languages across a plethora of media outlets.   The most detailed press report in English can be read at Crux Now here.  A very thorough summary of the latest round of news shared with us by someone very close to the IVE can be read at the latter half of this post following our comments below.

As it stands now, the indisputable facts related to Buela are:
And to the best of our knowledge the timeline has been:
If you’d like to follow up on the references we have shared a few here.  This list is by no means comprehensive:

From this we’d like to call your attention to three points:

1) IVE/SSVM members were lied to: Almost 7 years later neither the IVE nor Buela have ever disclosed or shared any of these facts with their IVE priests, seminarians, or SSVM sisters.  The leadership told the public that Buela’s resignation was due to "poor health" while they told members it was due to “Church politics.”  (From [13] above it appears the IVE may have finally been forced to inform it’s priests that Buela was ordered to cut off contact - seven years later.)

2) IVE Seminarians were not protected: After his resignation for sexually abusing seminarians, Buela continued to visit and stay at IVE seminaries worldwide for at least three years and then continue to live at an IVE parish despite being found guilty of sexual misconduct with seminarians.

3) No apology or repentance: Neither the IVE nor Buela have publicly acknowledged Buela’s sexual abuse.  In fact both the IVE (see here) and SSVM (image below) continue to promote Buela on their websites and maintain a website for Buela to post blogs and videos of himself (here.)

Fr Buela is still promoted on the SSVM Website: 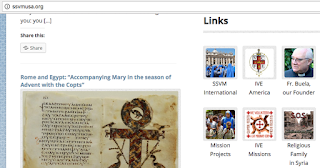 We maintain this blog primarily as a warning to discerners who are thinking about joining the IVE or SSVM.  To those readers we would like to reinforce that if you join the IVE or SSVM you are joining groups whose leadership has demonstrated it will:

As you can imagine, we have much more commentary to come in future posts.  For now we are content to share a summary of recent events from someone who has been close to the IVE for many, many years:

My intention is to share with the English-speaking world the latest events in this Father Buela’s saga, which started last November 30th. There is nothing in English yet, it is still very local, but people are talking in facebook groups by the many hundreds, if not thousands. That’s the reason for this simple and succinct account. I decided to add the links because I am confident that many would like to use Google translation. So it goes!

In the last week of November 2016, a known institute for the education of the deaf, Instituto Provolo (in the city of Mendoza, Argentina), came out in the media news as a place where child abuse happened. From five culprits, two of them were priests. Furthermore, one of the priests, 82 years old, had a history of child abuse in his native Verona, Italy. As details came out, everyone was outraged.
http://www.lanacion.com.ar/1960867-ya-son-cinco-los-detenidos-por-los-casos-de-abuso-a-alumnos-sordos
http://www.nytimes.com/aponline/2016/12/05/world/americas/ap-lt-argentina-italy-priest-abuse.html

On Nov 30, 2016, MDZ Online, an online newspaper from Mendoza Province, Argentina, breaks the news of a minor seminarian abused at the tender age of 12 years old, by one of the superiors at the IVE Minor Seminary in the city of San Rafael, in Mendoza Province (the city of San Rafael is about 150 miles south of the city of Mendoza). The abuser was at that time a deacon and now is a priest. Though not public, the alleged abuser’s name is now known. People who were contemporaries at the time identified him in facebook groups as “Paicho”. At the time of this news, he last residence was the IVE monastery in Los Coroneles, in the outskirts of San Rafael, Mendoza.
http://www.mdzol.com/nota/706722-abusos-tambien-en-el-verbo-encarnado/

Years later, in 2005, when this victim was in his second year of Philosophy at the IVE Major Seminary, he opened up to his then superior Father Gabriel Zapata, IVE.

The victim followed through his seminary formation and then became a priest, but to his sadness, he realized that after years of denouncing the abuse, nothing has really been done. Furthermore, after becoming a priest, he came to know some other victims sexually molested by Father Carlos Miguel Buela. They were many. It is then that the victim (only public known name is Luis, though many know already this victim’s identity) decides to go to bishop Eduardo Taussig of San Rafael in Mendoza Province, Argentina, since the IVE did very little about it (only moved the molester from Peru to an IVE monastery in San Rafael, Mendoza). Bishop Taussig took all the evidence to the Vatican, as well as other cases that were coming to the chancery (as many as 20 young priests have accused Father Buela of sexual harassment, if not more!) and that was the beginning of a process that led Father Buela to be found guilty of committing such abuse and therefore being removed as Superior General of the IVE and additionally also barred from ministry by two popes, Benedict and Francis.

Father Buela keeps his agenda of guiding and visiting communities of the IVE, (he even runs a website with spiritual advice, http://www.padrebuela.org/). He was ordered to be in a monastery in Spain, but it is not truly known how long he stayed there. Then, by claiming bad health, Pope Francis allowed him to live in Genova, Italy, in one of the churches run by one of the IVE priests. The pastor is Father Omar Mazzega, IVE. Father Buela also had in Genova a young priest secretary, Father Codutti, IVE.

This boldness of Father Buela with his lack of repentance plus the turmoil for the Instituto Provolo’s scandal gave the energy and timing for the MZA Online’s Nov 30 article, I guess. Luis came out with details of the abuse he suffered and the cover-up by IVE’s authorities. With such news, it was also mentioned that Father Buela has a history of accusations of sexual abuse. News of other cases of abuse followed in the media.

Many other media took it from here and erroneously reported that Father Buela sexually abused of Luis. In fact, as far as we know, that is NOT the case. They did not read well the first article in MZA Online “Una historia de abusos en el Verbo Encarnado”.

After all this noise, Father Pablo Federico Rossi, as official spokesperson for the IVE, refused to be on local TV but issued an official media report (XII-2-2016) in which it is affirmed that Father Buela did not abuse of any minor. Implied in the report is that there is no acknowledgment of Father Buela’s sexually abusive behavior because so far all known victims of Father Buela’s harassment were molested when they were in their 20’s. They were no minors, but were definitely vulnerable adults, since Father Buela was their Superior General and Founder.
http://www.mdzol.com/nota/707217-el-ive-respondio-por-la-historia-de-abusos/

The official media report by the IVE Leadership signed by Father Rossi was so weak in its content that the following day Luis writes a public letter to MDZ Online proving the fallacies and falsities of the IVE official report.
http://www.mdzol.com/nota/707335-en-primera-persona-luis-le-responde-al-verbo-encarnado/

Furthermore, the chancery of the diocese of San Rafael, when visited by reporters the following day, confirms that Father Buela has been found guilty of the crime of sexual abuse on many occasions with many victims.
http://www.unosanrafael.com.ar/el-obispado-no-respaldo-al-padre-buela-y-dijo-que-la-iglesia-es-culpable-n1295626.html[G13]

So far, the IVE Leadership is telling all his members, priests, nuns, seminarians, families, to keep painting the mast of the ship for the thousandth time, con gran alegria, while the ship is sinking...

On December 12, 2016, Bishop Taussig of San Rafael, Mendoza read an official press release and welcomed questions from journalists for almost an hour. I have found all these links by mere using the words “taussig san rafael verbo encarnado” in Google News Search.

For those having some difficulty reading Spanish, this is an English version of the previous ACI Prensa article. http://www.catholicnewsagency.com/news/institute-of-the-incarnate-word-founder-guilty-of-sexual-misconduct-47786/

On December 16, 2016, the leadership of the Institute of the Incarnate Word was called to a meeting with the CICVSA at the Vatican. What is known from that meeting is that the leadership of the Institute received the appointment of a Pontifical Assistant ad nutum Sanctae Sedis in the person of Monsignore Vito Angelo Todisco. He is not a pontifical commissioner, only an advisor to the leadership of the Institute. Father Ricardo Clarey IVE, moderator curiae, informed all the members of the Institute of the assignment and role of Mons. Todisco, as well as a clarification of a Vatican decree from CICVSA regarding Father Buela’s prohibition of any kind of involvement in the life of the Institute of the Incarnate Word. So far, the news of Father Buela’s separation from the IVE was not fully disclosed to all the members. The last official word from the IVE’s authorities was the official press release from Father Pablo Federico Rossi on December 2, 2016, where it is affirmed that Father Buela is innocent of abusing minors, but making an obvious omission of Father Buela having found guilty of sexual harassment of seminarians and young priests at their major seminary in San Rafael, Argentina. This link is the same one I included earlier in this narrative. http://www.mdzol.com/nota/707217-el-ive-respondio-por-la-historia-de-abusos/
at 1:34 PM